This is our first meeting after the holiday. To be honest, I was a bit worried before going to the nursery. When we were back from the 1st term break (the break after I got back from South Africa), the nursery was ravaged upon recognition — by the power of nature. I mean, it wasn’t damaged, but nature had absolutely shown its true power. Mud from the flower pots were washed out onto the artificial grass on the road between racks of pots, the flower pots were full of weeds, and unsurprisingly, some of the plants died, some were dry and some were snapped. The work that we needed to do were doubled, and it was no exaggeration to say that what had happened was a green nightmare. We should actually try to recruit some other students who were interested in taking care of plants (especially those who like biology) to come over here during the holidays.

So we walked into the nursery. To my surprise, the nursery looked normal: no dead plants, no broken pots, everything were in place as good as when we left it. The nursery was the place at the corner of our school, away from the buildings and just next to the dormitory and the clinic. Very little students might want to go there, partly because it looks so simple that no one would look at it for a second time, and partly because that it looks wet — how could it be not wet if it was designed for Southeast Asia Rainforest plant species? A few simple poles, a large cloth tied onto the poles acting as a roof, and that was the appearance of the nursery. There were sunlight shining through the cloth onto the racks of plants underneath it, the light of life, providing enough food and energy for these Southeast Asia plant species. It is probably because of the rains during the CNY holiday. The only thing is that there was a strong odor of poop — some careless students might come over here during the holiday and knocked over the fertilizer bin.

But that was not a problem. We started on the works. Our student leader Nancy was quarantined at home due to the novel Coronavirus, but she told us that we had been too kind on the weeds that they were all over the nursery, even on the artificial grass. So that was the work to do for some of us.

For me, the task was to replant several trees of the species Sterculia macrophylla. These trees had been planted by us in black plastic containers as seeds, now that they had grown much bigger and the small plastic container couldn’t hold it anymore, we will need to plant it into another pot.

This was like any other normal works in our service, it was just that this time I realized something else. Rainforest Restoration Project was the first college service I have tried out that interact with the plants in our campus so much. Before I enrolled in the service, I thought what I would learn from it is probably to get out of my comfort zone and be more bearable to muds, dirts and be more tolerable to the harsher environments. Today, I truly understand what it means by the interaction between humans and the environment. It isn’t that the humans could bear to stay with the environment, neither is it that humans could learn to do weeding or other works without feeling disgusted. It is more of how people started to get appealed and attracted by the environment, by its beauty. I won’t feel that way towards nature if I didn’t join the service, since I just feel that it is dirty to touch the muds and the unwashed pots. What really changed my mind was a member that was in the same service with me. She was really fond of biology and was an expert at planting plants.

When we were replanting the Sterculia macrophylla plants together today, while I was reluctant to touch the mud, she calmly lifted the plant out of the plastic container without a second thought, clearing the mud around its roots and, slowly and lightly, placed it into the pot. The way she took the roots out of the mud, how she hold tightly around the branches of the plant without the slightest reluctance, as if what was in front of her wasn’t a muddy wet plant with its curly roots, and instead a pet, a friend that she would be willing to spend lots of time with and put her love into her interaction with it.

In my last school and the school before that one, our class had several attempts in making our classroom greener by planting classroom plants. These plants were always put at the place where everyone could see, not the place where it was the most suitable for the plant. It was always our teachers who watered the plants and asked the reluctant students to do it with her, and no one actually liked the process. When there were weeds that were growing in the pot, no one wanted to clear that away — isn’t our aim making our classroom greener? Now weeds are also green, why shouldn’t we keep it? I mean, these are all perfectly normal, but I feel like what I did in my past schools, planting the plants and watering them, were not actions out of love and adoration. These works were compulsory to do, and we did it not out of our true hearts, and if we felt happiness from doing so, it was because we felt that we were the only class who had done something like this and we did not have to go to academic lessons and did maths or wrote essays. It was never because of something I felt today when I saw that girl ran her fingers on the bark of the plant, putting soil around its roots as if helping it to go to bed, putting the layer of mulch in a ring shape and watering it with a joyful smile.

When I looked at the nursery again, I no longer felt that it was a rainforest that no one cares if they died during the holiday or the term break. We are all taking care of it, all of us, the service students, teachers, the gardener, biology students. We had gently filled the mud in gently for all of them, and undeniably, they are our friends. Plants live in a completely different way compared with us, but we live in the same world and rely on each other. How amazing. 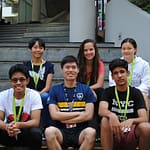 Next story :Project SIAT - Get Started